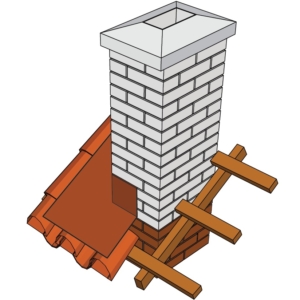 The purpose of the flue sleeve is to protect the chimney head from damage caused by acidic condensate. Acidic condensate usually results from the low temperature of smoke exhaust – water drops appear on the interior surface of the flue and the floating soot particles dissolve in it. As a protective sleeve you can use both stainless steel and ceramic flue sleeves.

Before beginning the construction, it is necessary to soak the silicate bricks in a water tub and then allow them to set in shade. Soaking is necessary to create free moisture in the brick that prevents water being sucked out of the mortar. Otherwise there will not be proper adhesion between the bricks and the mortar and the hair-thin crack caused will collect moisture when freezing and this will break the chimney. Letting the bricks set is necessary to remove the excessive water from the surface of the brick to avoid mortar drooping down the brick. It is recommended to build the chimney head in the spring or early autumn using Silikaat’s cement mortar (T100/300) on a cloudy, humid and calm day. The constructed chimney head must be able to set for a month before the frost season. It is advisable to have the chimney head be built by a worker with a potter’s certificate.

It is advisable to have your chimney swept twice a year: in the spring after the end of the heating season and in the autumn before the beginning of the new heating season. It is important to remember that the chimney has to be checked by a certified chimney sweep at least once every five years.

WHY TO USE SILICATE BRICKS FOR A CHIMNEY?

Why choose silicate blocks for building internal and external walls

Throrough manual for building a chimney

Why choose silicate blocks for building internal and external walls

Throrough manual for building a chimney